The importance of social media influencers to brands

The number of influencers is increasing by the day, and it’s a term that is being used more and more, but what exactly is social media influencer marketing?

Influencer marketing is a business collaboration between a brand and an influential person on social media who offers value to brands. It can enhance recognition of a brand or product and help them gain access to new customers potentially resulting in an increase in sales.

Roxii Hoare-Smith, blogger and Account Manager at davies tanner, shares five tips on why social media influencers are so important to brands and how to work with them.

According to Hootsuite there are over 500,000 influencers online. Fortunately, this means you have a lot of influencers to choose from, but unfortunately this also means it can be difficult to find the right influencer for you.

To narrow down your choice of influencer you need to consider the following:

Understand – You need to understand your product and your target audience as your influencer campaign can’t be aimed at everyone.

Followers – It is a misconception that working with influencers with a large following is the best way to go. Nowadays follower count doesn’t matter, it is primarily about the relevance of the audience. An influencer with a smaller following, often referred to as micro-influencers if they have between 5,000-25,000 followers, can be just as powerful.

Micro-influencers usually have a loyal and tightknit following and they often have higher engagement as their followers have trust in them. They may also focus on a specific niche, meaning they will have a highly targeted following; this could be a particular topic they post about or the area they are based in.

Genuine – You want to work with an influencer that has a genuine following and engagement which will promote your product to the right audience, instead of those who may have bought followers or likes. In 2018, Social Chain launched an influencer fraud tool to view an influencer’s true engagement, as according to them 25 per cent of influencers have paid for fake followers.

Well known celebrities and bloggers often spring to mind when we think of influencers, but you also need to consider other types of influencers. Overnight influencers are people who have suddenly gone viral in the media and turned into an influential figure overnight. A most recent example is ‘Alex from Glastonbury’ who was invited on stage during rapper Dave’s set at Glastonbury.

Alex’s social media following skyrocketed, at the time of writing he has been verified on Instagram with 233k followers and now has 186k Twitter followers, and he has since been booked for appearances and clothing brand collaborations. 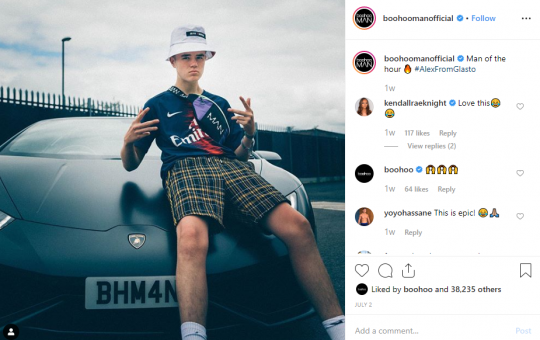 If you are looking to work with an ‘overnight influencer’ then you need to act fast as their following and engagement is going to be at its best when their story is still going viral, plus there will be plenty of competition from other brands.

Influencers have a platform to start a conversation and raise awareness, whether that be about a current issue or brand. A post which sparks a conversation, raises an issue and has an emotional impact will receive the best engagement and results.

A recent campaign by water-filter maker Brita called #NoFilterNoFuture was set up to encourage people to not use single-use plastic, while also promoting Brita’s water filter bottles. Brita worked with 21 Instagram influencers by using the influencers’ original beach holiday photos which were photoshopped to show the beaches polluted with waste. This was to showcase what these dream travel locations could look like in the future.

Instagram is often associated with heavily saturated, edited photos, but instead Brita and the influencers caught attention by going against the norm with their editing with shocking, eye-catching images. By working with influencers, Brita was able to promote a product and show its commitment to protecting the environment while also highlighting the importance of an issue to a large, engaged audience. 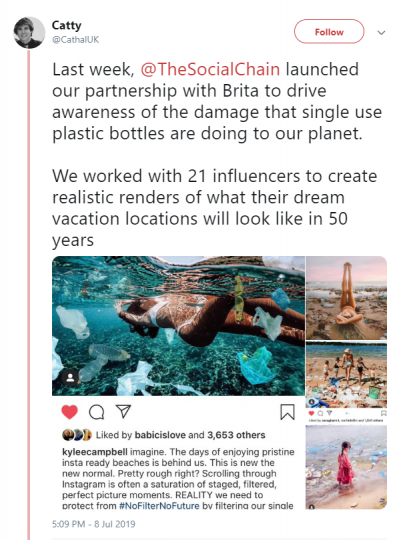 An influencer campaign doesn’t only raise awareness of a brand, increase sales and increase a brand’s social media following, it can also drive traffic to your website, online shop as well improve SEO. By providing a link to your website through a blog post or social media profile you can increase your domain authority and subsequently your rankings.

Sponsored posts include a fee in return for a dedicated post on a brand and sometimes an incentive such as a competition or discount code.

There is also an opportunity for collaboration to build an ongoing partnership with influencers. This could be through gifting – working regularly together to create content by, for example, regularly sending products for review or visiting a venue to regularly promote new products. You can also collaborate through guest blog posts or a social media account takeover with the influencer to boost your social profiles.