Earlier this year I visited Abu Dhabi as the onsite PR representative for our client IBTM Arabia. The capital of the United Arab Emirates and the second most populous city in the UAE (after Dubai), Abu Dhabi is sometimes considered Dubai’s more cultured, sedate neighbour. A stunning city full of charm, culture and friendly people, here are my top 5 reasons to visit Abu Dhabi:

Ok, so 7-star doesn’t technically exist, but if it did, Abu Dhabi would surely receive this accolade on the basis of its hospitality alone. I stayed at the spectacular Jumeirah at Etihad Towers, and this is exactly the kind of hotel you dream of after a very early start and a day of airports and travelling. The moment I was welcomed into the hotel lobby I instantly felt more relaxed. It’s a beautifully-designed space with calming music and soothing colours, but it’s the people that make it so memorable. Nothing is too much trouble, and hospitality and customer service here often mean thinking of things you need before you’ve thought of them yourself.

While waiting in line to check in we were given a glass of mint juice and a hot towel to freshen up with, and the check in wait suddenly seemed so much more pleasant. Later during my stay I found a Jumeirah bookmark tucked into the book I was reading by my bed, left there by a thoughtful member of hotel housekeeping. Clever marketing yes, but also a personal touch that I loved (and I still have that bookmark). There was often a coffee waiting for me by my laptop in the office where I was stationed, and everywhere you go you’re greeted with a smile and a friendly hello. Hospitality is a key part of the culture here and it really does add to your stay. 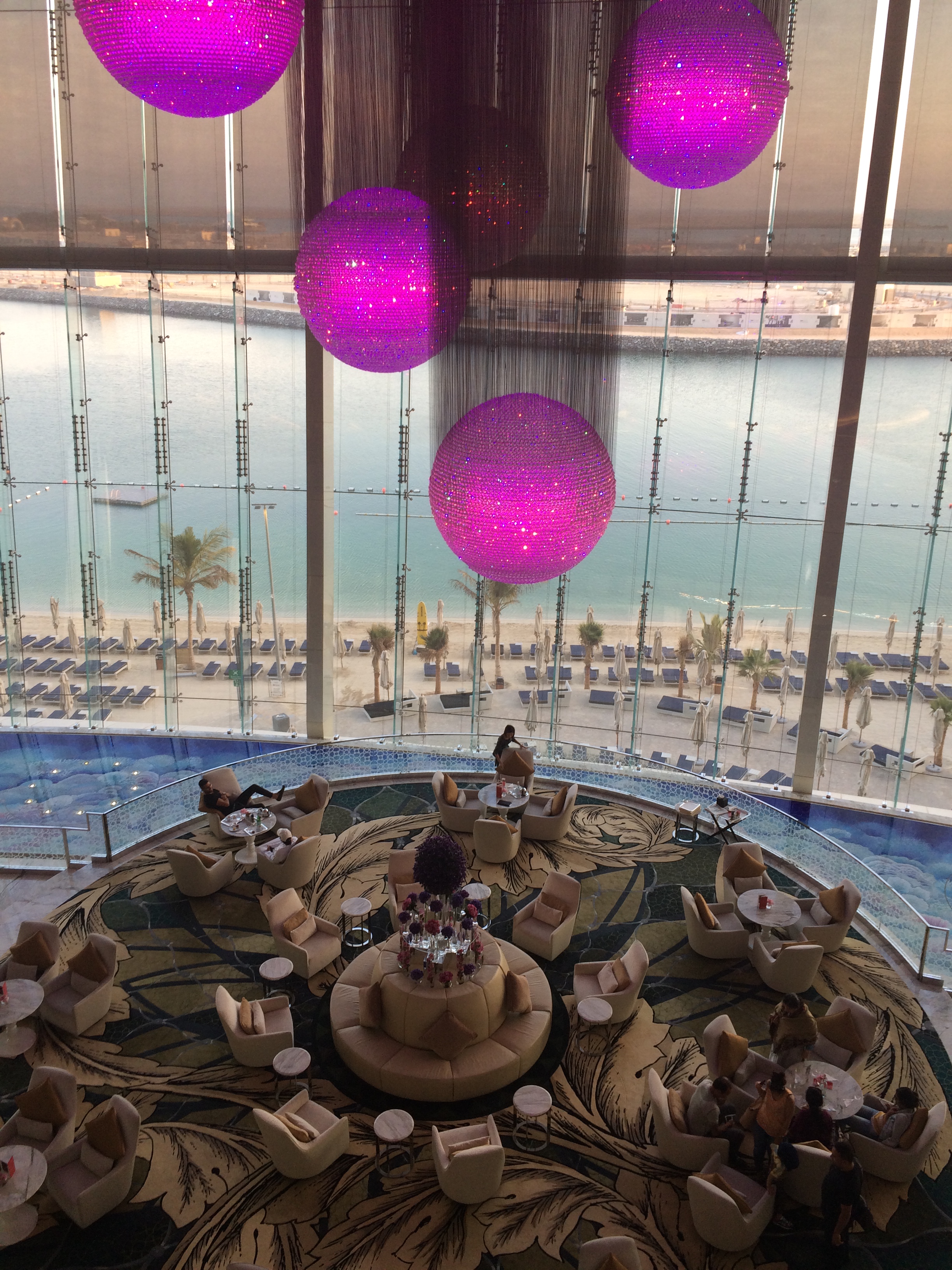 For a glimpse of life as the other half live it, head to Emirates Palace. Just across the road from Jumeirah, this is also a hotel, although you wouldn’t know it. Operated by Kempinski, it feels more like a private palace and is an 850,000sqm homage to gold. There are stunning Arabian-inspired gold domed ceilings, sweeping staircases, quiet plushly-carpeted corridors, deluxe presidential suites, nine restaurants and 7,000sqm of meetings and events space, including an auditorium and ballroom.

For a real taste of luxury you can order a cup of coffee in the hotel café with 23-karat edible gold leaf sprinkled on top (the Palace Cappuccino) and for a souvenir with a difference the Emirates Palace vending machine will sell you, not crisps and a can of coke, but 24-karat gold in various different forms. 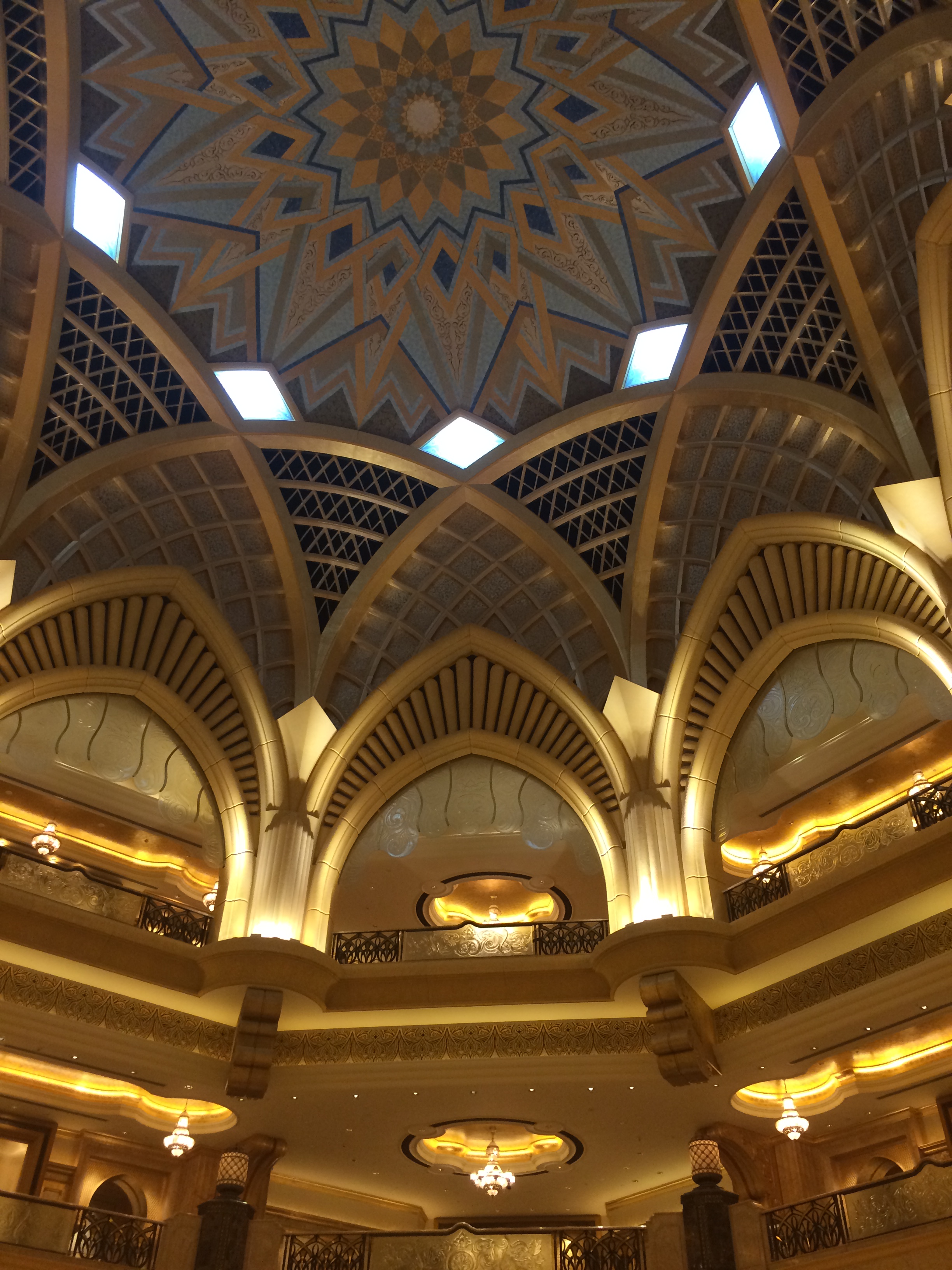 Abu Dhabi has been influenced by the food and drink of many different countries, and there is such an amazing diversity of food on offer that you can find pretty much anything you want here. Think tasty bean and lentil salads, wagyu beef, herb-laden tomato platters, creamy hummus, oysters, bread stuffed with pesto, chargrilled lamb and chicken, flatbreads, fish, sushi and aromatic rice. But that’s not all, and as a vegan, I certainly didn’t go hungry.

Breakfast is also spectacular, and if you visit on a Friday (the start of the weekend in the UAE) take advantage of the new trend for brunch. A big thing here, most hotels will offer weekend brunch packages which include amazing buffet-style food with optional bubbles or cocktails and musical entertainment.

Finally, if you get a chance to try a traditional Arabic coffee, take it! Made with Cardamom and rose water, and eaten with a date, it was the nicest coffee I’ve ever tasted. 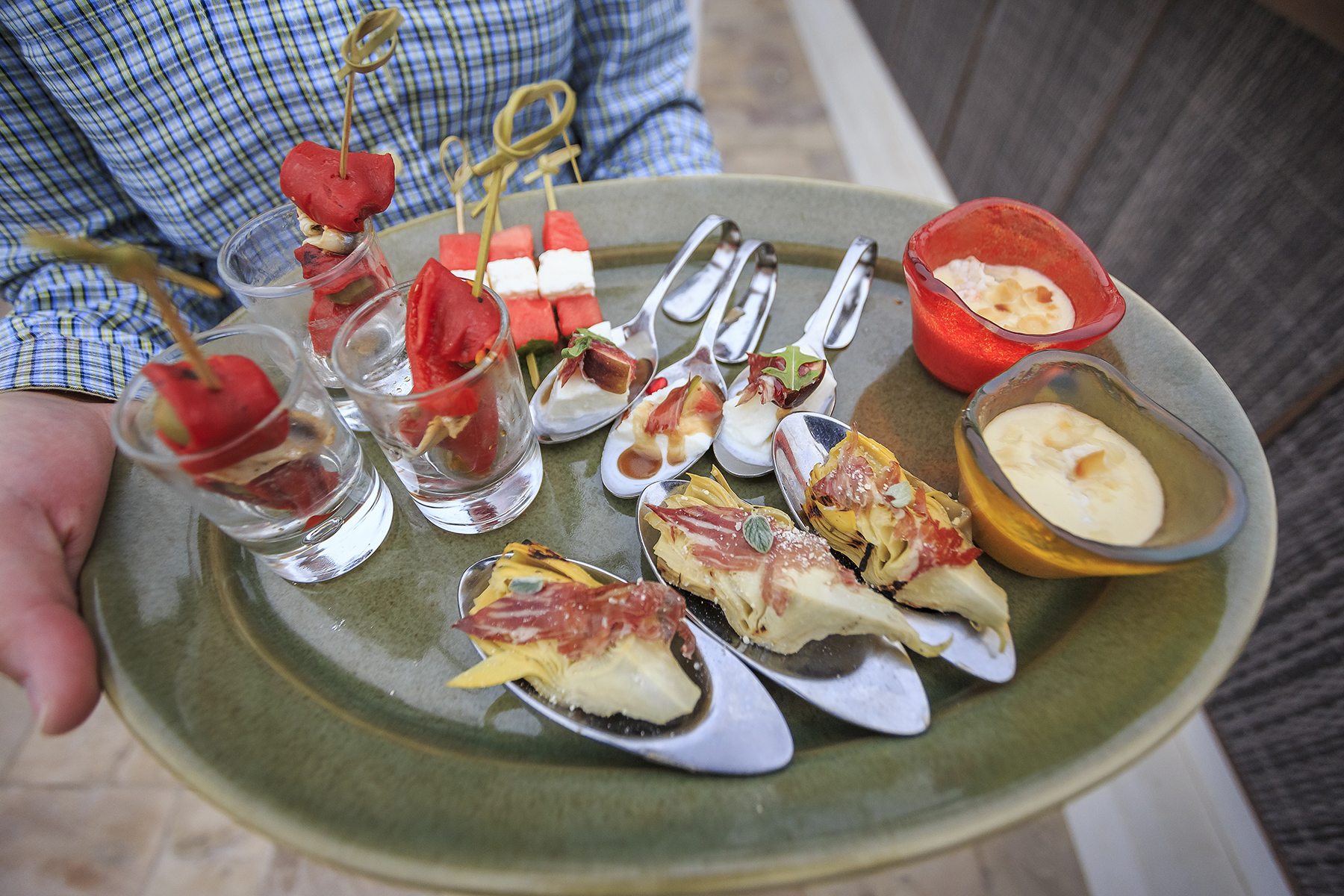 A meeting of old and new

In recent years, countries in the Middle East have looked to reduce reliance on oil for their economies and instead have ploughed investment into tourism. There has been a massive building boom – of hotels and infrastructure, and the region is fast becoming a well-established player in the worldwide tourism and MICE industries. Buildings are modern and thoughtfully-designed, such as the Al Bahr Towers, completed in 2012, with their honeycomb-like skin which automatically opens and closes depending on the intensity of the sun to regulate the internal temperature of the building. Or the penny-shaped Aldar Building – the first of its kind in the Middle East; its circular shape symbolises stability, unity and rationality. And not forgetting the Louvre Abu Dhabi which opened in 2017. Designed by French architect John Nouvel, its crochet-effect domed roof is spectacular when lit up at night against the Arabian sky. 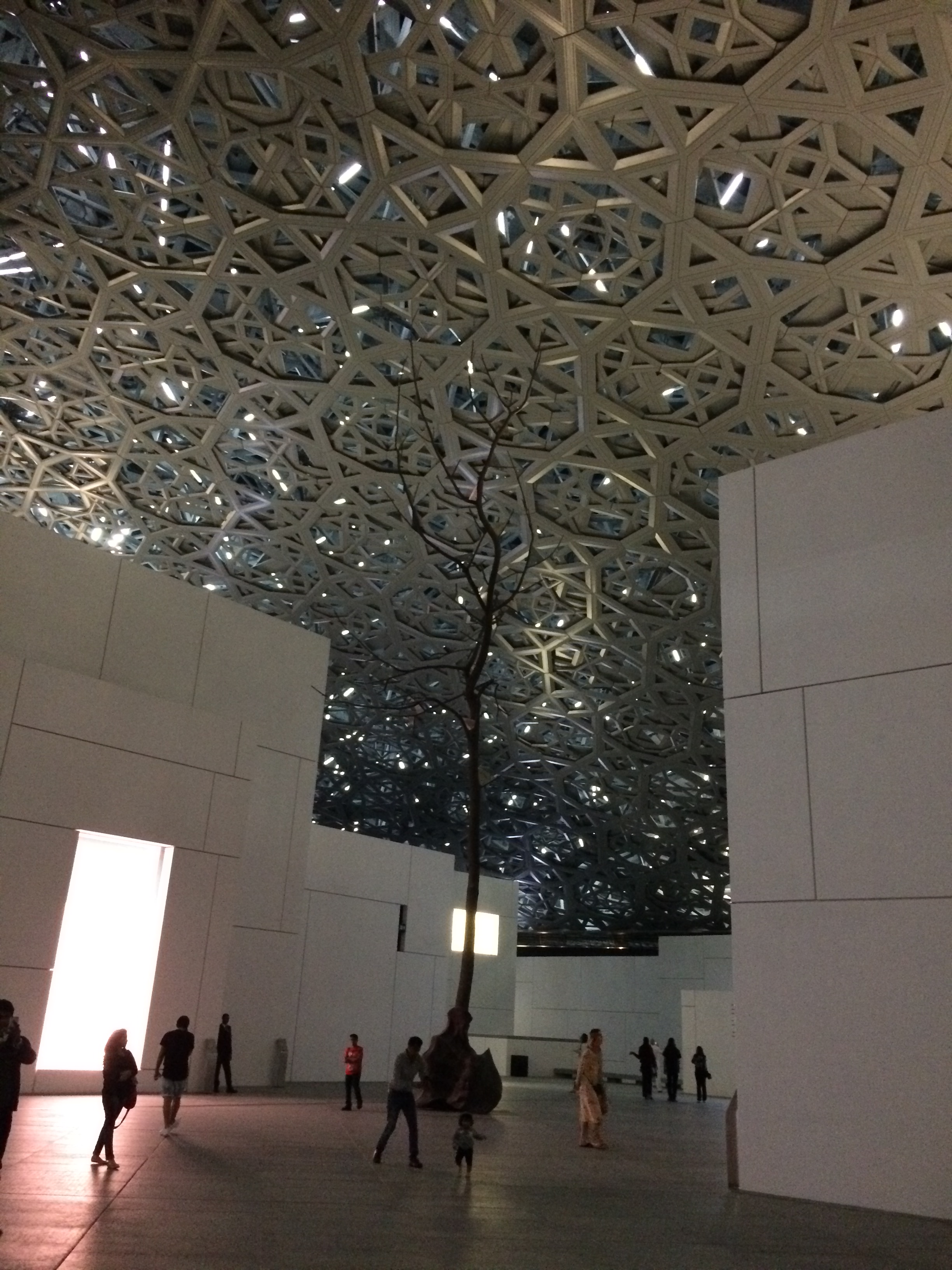 In Abu Dhabi, culture is King, and two recently opened buildings epitomise this: Qasr Al Watan and Qasr Al Hosn. Our trip to Qasr Al Watan was awe-inspiring. A presidential palace within the grounds of the Emirates Palace, building work began on the project around seven years ago, and, quite astonishingly given the scale and intricacy of the building and its design, it was completed around two years ago. Until recently, this vast white and gold Arabian palace was used exclusively by a small handful of the country’s leaders for private functions. The decision to open it to the public was taken because they wanted it to serve as a monument to Arabian culture, knowledge and craftsmanship.

The next day, and under a light shower of rain (which our guide assured me is considered a blessing in Abu Dhabi) we went to see Qasr Al Hosn. This is one of the oldest buildings in Abu Dhabi, holding the city’s first permanent structure; the watchtower. It has, over the years, been home to the ruling family, the seat of government, a consultative council and a national archive. Now, after a 11-year renovation period, it is a living museum showcasing the culture and history of the region. 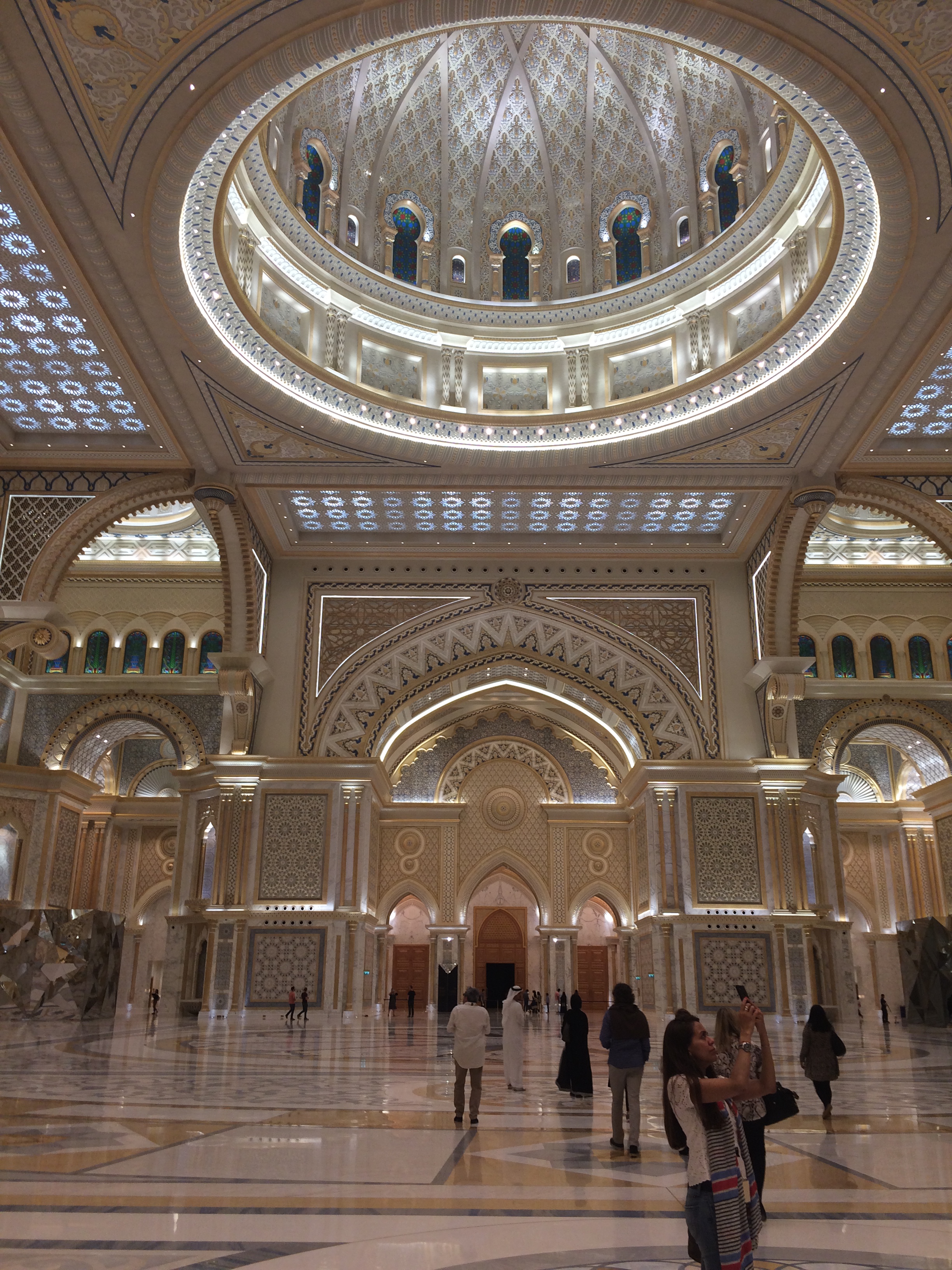 To find out more about Abu Dhabi see https://visitabudhabi.ae/uk-en/default.aspx