Don’t look back in anger: a journey into the media and technology of 1997

Get ready for a journey through time. A courageous expedition to wade through the communication technology of yesteryear. As we celebrate dt20, I’m taking you on a historic tour. We’re going back 20 years to revisit the way we worked and communicated when davies tanner launched in 1997.

Dial-up Internet: At the time, we thought it was ‘well-wicked’

We’re travelling via dial-up internet connection. In those days, it was pioneering technology. Basically, to use the internet, you made a phone call through your computer. You couldn’t use your phone for talking while it was on and it was slow. So slow in fact, that if today’s fibre optic broadband speeds were the latest supercar from Lamborghini, dial-up is the Ford Model T. 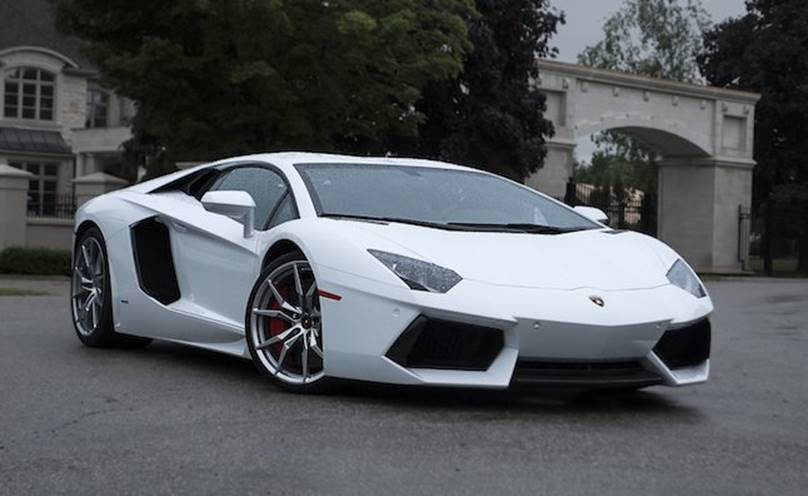 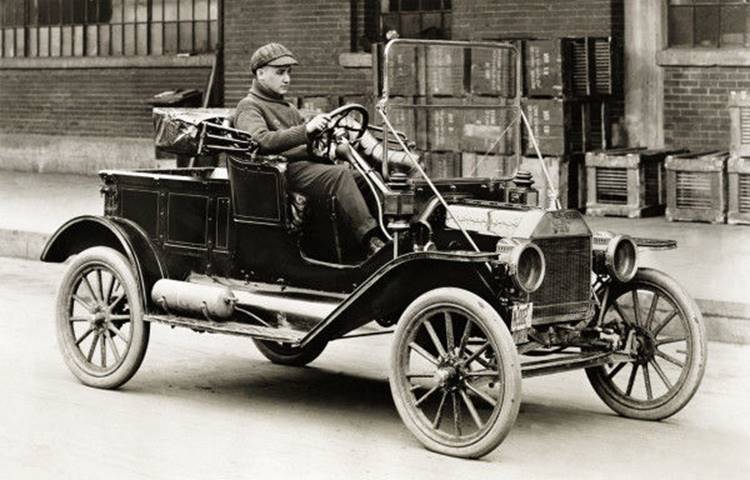 Please bear with us through buffering downloads and connection crashes and you’ll see a treasure trove of early digital delights. Schwing!

As your guide, let me reassure you that you’re in safe hands. I’ve been to 1997 before and I remember it well. It was my final year at university, the year I became a father and late autumn was surprisingly warm. So, the last time I visited 1997, I completed a 10,000-word dissertation and wore a t-shirt to the birth of my son in mid-November.

Also in 1997 the Teletubbies first aired on BBC TV, Tony Blair won a landslide victory for New Labour in the general election, Harry Potter and the Philosophers Stone was published, UK sovereignty over Hong Kong was transferred to China, Diana, Princess of Wales died, the IRA declared a ceasefire and Scottish and Welsh devolution began.

Rest-assured, I’m familiar with the late-90s terrain and we’re going back: let’s see what happens this time around. 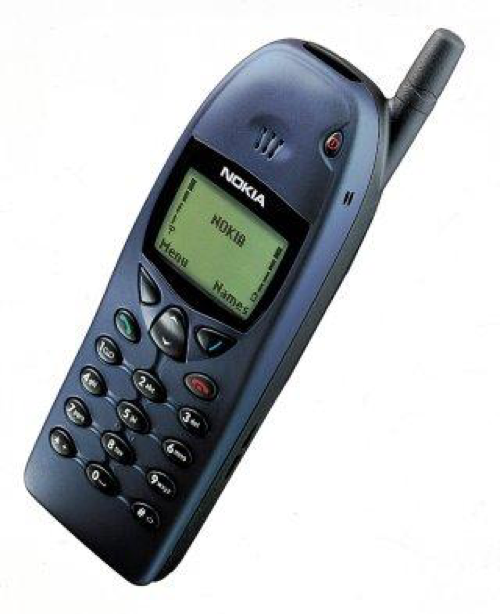 Your mobile phone was smart. Not! 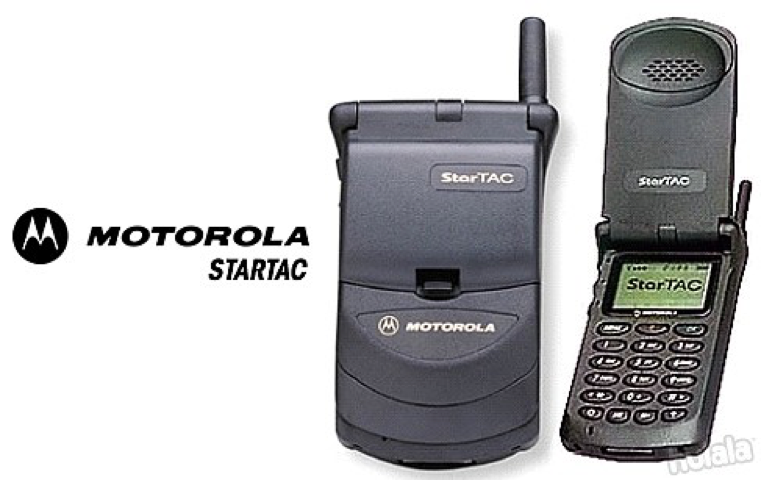 I trust you didn’t bring your smartphone? It doesn’t work here. As you step into the communication world of 1997, we’re issuing you with the latest in mobile technology, and I hope you’ll agree, it’s pretty swish.

Your choice of mobile phone is cutting-edge, the Nokia 6110 or the futuristic Motorola StarTAC – the world’s first clamshell mobile phone.

The Nokia offers three games, a calculator, clock and calendar and works as a pager; yes, people in 1997 are still using pagers. As well as looking like something Captain Kirk would never be without, the StarTAC’s battery life will give you 60 minutes of talk time, not bad considering it cost £1400 at launch in the UK.

Got your mobile sorted? Great, now can you send an email please? 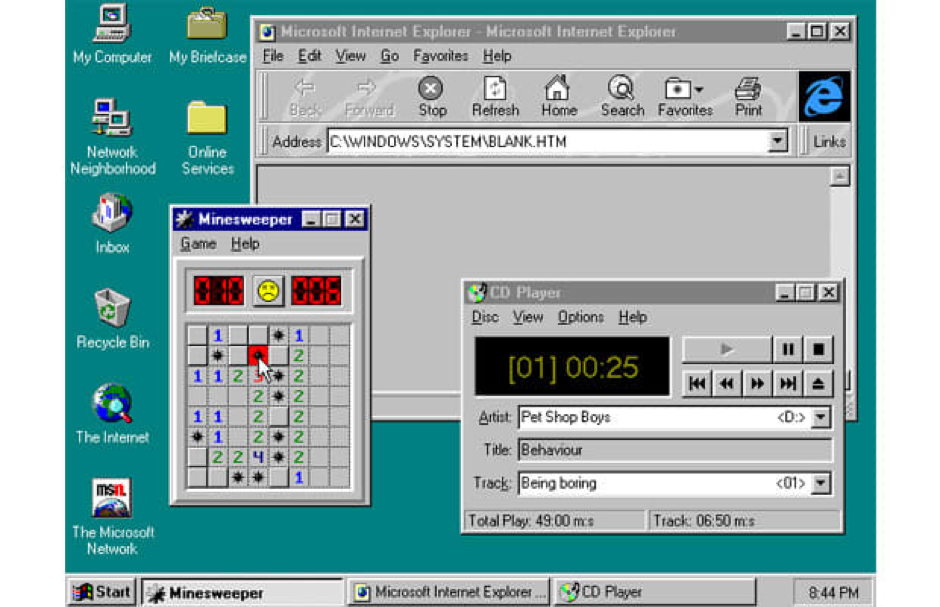 Two years after its launch, Windows 95 is still considered revolutionary. It changed the way we use computers, introducing some hallmark Windows features like the Start Menu, the task bar and has Internet Explorer built in. Windows 95 set the tone for every update of Windows to follow. This is cutting-edge stuff.

To send your email, you’ll be running Outlook on Microsoft Office ’97. Be patient. 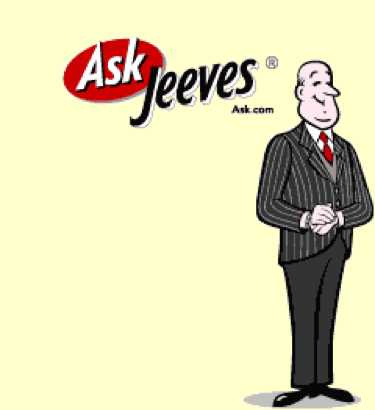 If you are in any doubt of the significance of the release of Windows 95, Google it. Oh, sorry, you can’t. Google doesn’t exist in good ole ’97. But, never fear, your options for searching the web here are vast. There is a motley crew of powerful search websites, you can use Alta Vista, Lycos, Excite, or why not give new kid on the block, Ask Jeeves, a try? 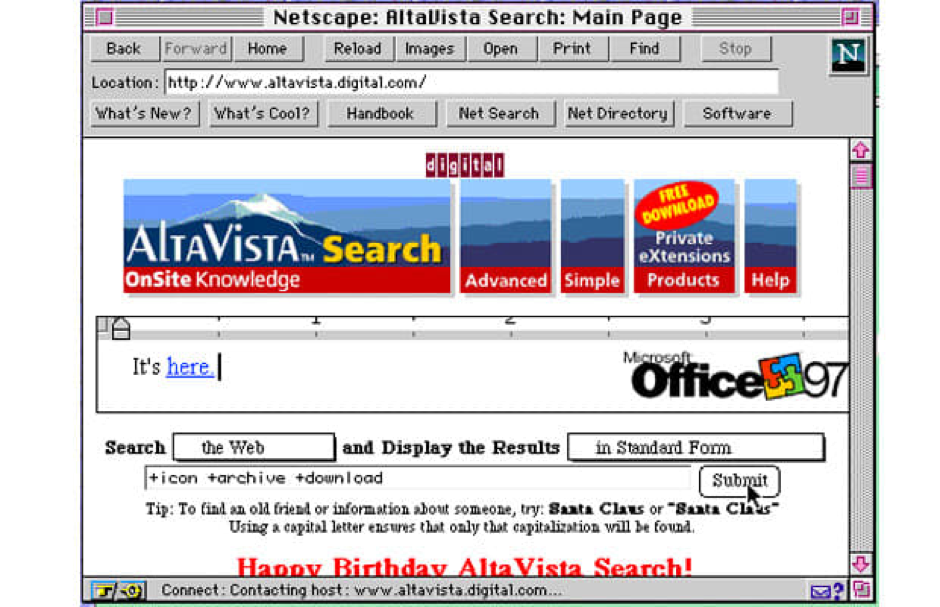 In 1997 internet connections are 217 times slower 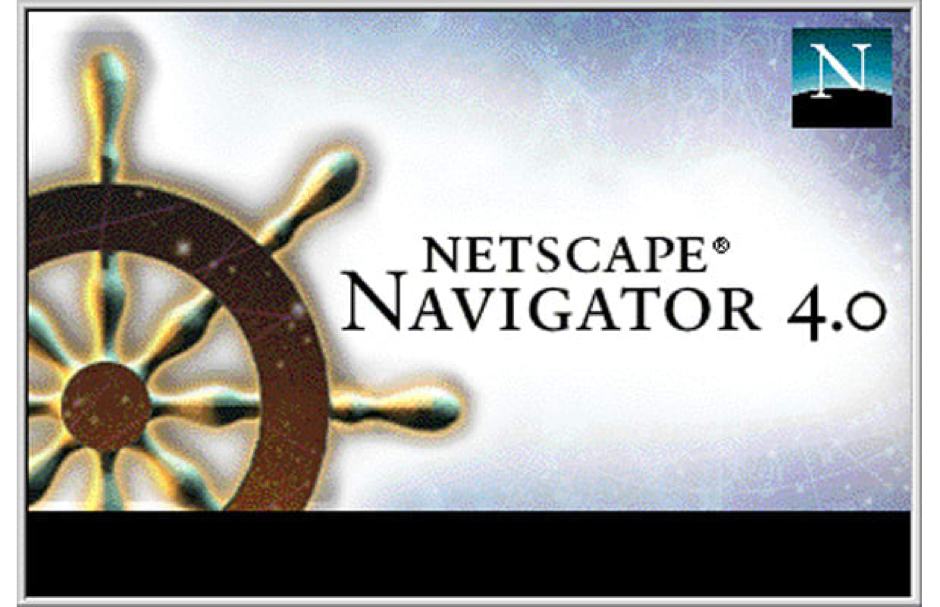 So, now you know where to search online, open up your Netscape Navigator – the web browser that most people are still using – and go ahead and surf the Information Super Highway at a staggering 28.8 kbps. If it seems a little slow, that’s because today’s broadband speeds are equivalent to around 6250 kbps – and still we complain.

Sending email attachments bigger than a few kilobytes takes hours at this speed and megabyte-sized files just won’t go. It’s still ‘snailmail’ for images and large documents, so if you could print out what you find and pop it in the post, that would be perfect, thanks. 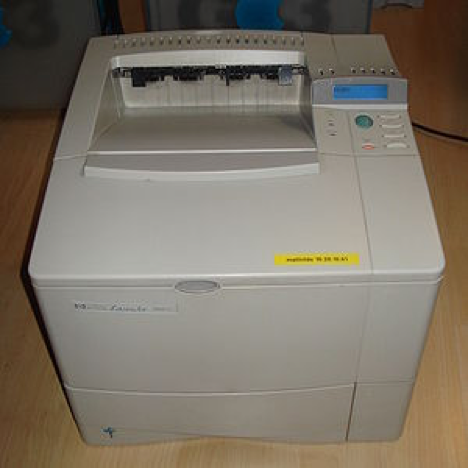 You have to take your hat off to the printer technology in our 1997 office. HP has just introduced the HP LaserJet 4000 family of printers. These ground-breaking printers can print at a forest-destroying rate of 17 pages per minute. They can be set to 600 dpi or 1200 dpi print resolution. It’s the start of the future of printing, these bad boys are network ready and can print double-sided too.

A bulk-standard modern printer from HP prints 55 pages per minute at 600 x 600 dpi. OK, it’s better, but it’s not such a staggering improvement as internet speed or computer memory capacity.

Floppy discs were still a thing

If you’re thinking you could save the documents to disc and post that instead, you’re right. Go ahead. A CD burner will cost you more than a grand. The floppy discs of 1997 are quite cheap, but you can only store about 1.44mb on one. That’s about half the size of a photo taken on a modern smartphone. 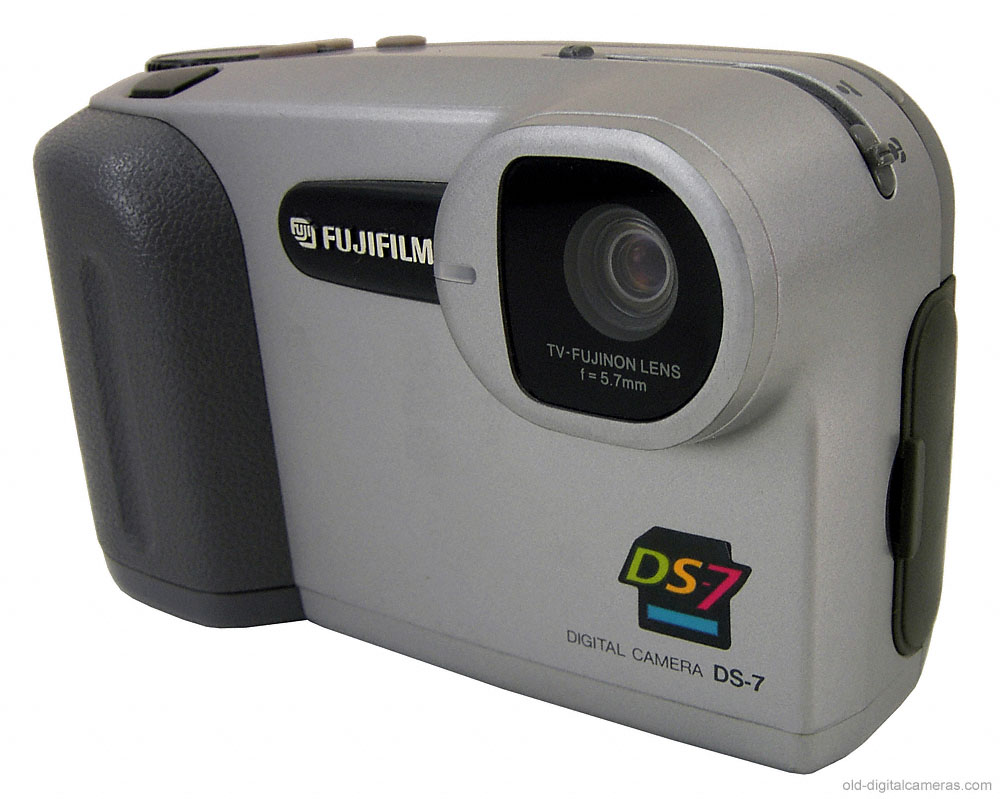 Talking of photography, maybe you’d like to take some snaps while on your trip back to 20 years ago? 35mm cellulite film is still the norm for photography, but we can offer you a digital camera if you so wish. How about the Fujifilm DS-7? It’s one of the first digital cameras aimed at consumers. You’ll enjoy a not-so-crisp picture resolution of 640 x 480 pixels, that’s just 0.3 megapixels. Fujifilm’s current mid-range camera, achieves 20 megapixels – other digital cameras are available.

OK, now, we need to attend a meeting in London. There are a few things to bear in mind. We’re going to arrange a time and place and stick to it. There’s no texting to say ‘I’m five minutes away’, or ‘I’ll call you when I’m in the area’. Mobile phone calls are expensive in 1997 and people just don’t use them that frivolously. Most people still feel a bit like a bit of a show-off talking on a mobile in the street too.

The train timetable is available on a handy, wallet-sized printed leaflet and at the train station. There is no app to tell us the best journey and what time to be at what station, so we have to plan in advance.

When we get to London, we will use a paper map and sign posts to find the office building the people we are meeting are in. Google maps on your phone is a long way off.

Before we leave for the station, in case you speak with anyone, here are a few language tips:

For the journey back

Before we return you back to your tech-obsessed, socially-connected digital life, here are some thoughts on the differences between communication here in 1997 and the world of 2017.

We read the newspaper in the morning, to know what happened in the world yesterday.

We had no idea what most people we knew, or had come across in our lives in some way, were doing that day or ever, it didn’t ever occur to us to think about it.

We lost touch with all but a few of the people we went to school with.

If we wanted to get in touch with people, we started by looking up their telephone number in the phone book.

We spoke to our immediate families in the morning at home, it was unusual to have any contact with them again until we arrived home in the evening.

A celebrity was a person who was famous for being a TV actor or presenter, a singer or band member, or a movie star. There are few exceptions – super models, perhaps. Politicians and business people were famous but they did not behave like celebrities. No one was a celebrity (or President of the United States of America) because of reality TV, YouTube or sharing selfies on Instagram.

Ah, those were the days.